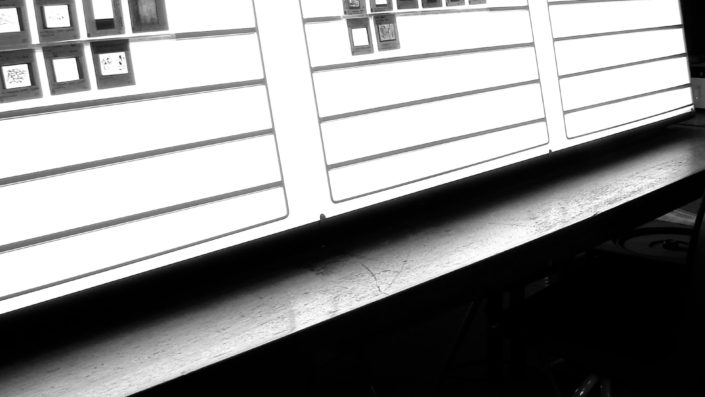 Many happy years of my working life at UAL were spent as slide librarian at Central Saint Martins, supporting academics in their teaching. Back then the 35mm slide was integral to the delivery of all lectures and seminars but as digital took over, the slide and its projector were used less and less, and eventually fell out of use altogether.

Working in CSM Slide Library was an education; I got to hear academics discussing ideas, making connections and chance discoveries. So I was delighted to read Professor Caroline Evans’ reflections on it in the newly published “Fashion Central Saint Martins”, by Cally Blackman and Hywel Davies. In “Conversations in the slide library”, Caroline describes how it wasn’t just a resource, it was also a place for thinking with images, and one which had a lasting influence on her:

“One image at a time, you would build up sequences of ideas, often working simultaneously on the five parallel bars of the lightbox, so you could create visual relationships both vertically and horizontally. Sometimes an unusual juxtaposition made you rearrange your sequences, making new connections you hadn’t previously thought of…

These thoughts were absolutely echoed in a recent ARLIS event, “Viva las Projectionistas”, held at Goldsmiths Centre for Contemporary Art on 30th October. In a space filled with the whirr and click of carousel trays on Ektapros, slides from the Women’s Art Library were projected onto the brick walls, whilst Goldsmiths lecturer in Visual Cultures, Astrid Schmetterling, reflected on the golden days of working with slides; slow, contemplative, thoughtful.

The Women’s Art Library began in the early 1980’s as a place where artists could deposit slides and other documentation to collectively raise the visibility of their work. That the medium chosen to preserve and promote the work of women artists has become an obsolete format is ironic, but fortunately not the end of the story.

Dr. Althea Greenan (curator, WAL) talked about the ways in which Goldsmiths students are actively engaging with the collection, creating sound and image pieces based on their interactions with the analogue material. Goldsmiths student Gishou Golshani presented “Trans-interference”, an audio collage made from selected cassette tapes from the WAL, recorded by women artists from 70’s to the 90’s. Curating students Agata Hosnova and Marie Kordova talked about becoming intrigued with the slide as physical object, so they photographed not just the images within, but also the slide mounts with their labels and handwriting. These digital images were then made into slides; “a reverse transformation from the digital to the analogue”. And these slides, projected at the event, will be added back into the WAL, a gentle to and fro between old and new content and old and new formats.

In the booklet that accompanied the event, Catherine Grant, another Goldsmiths projectionista (more properly Associate Senior Lecturer in Visual Cultures) mourned the passing of the slide library. “I miss the physicality and shared repository that slides allowed. The digital flow of images is vast, exciting, but impersonal…”. In a similar vein Caroline Evans recalls how the cards marking spaces left by borrowed slides “left a snail trail where other lecturers had been, so you could often follow a colleague’s train of thought. Sometimes these piqued your curiosity, and our silence was punctuated by jokes and companionable exchanges about what we were each up to. I had some of my best conversation in there”.

Though many of these spaces that housed slide collections have gone, the Projectionistas event showed that the slide’s latent potential still remains. Its tiny jewel like quality, all that concentrated visual information encased in a slim glass square gives it an intensity which fascinates art students today. Its transparency allows for all sorts of creative possibilities for overlaying images to create unlikely juxtapositions, never originally intended. And historically speaking, both slide film and mount reflect what was held in collections, what was being taught in art schools, what was valued, and how it was organised. So there is still a lot to read in a 35mm slide…