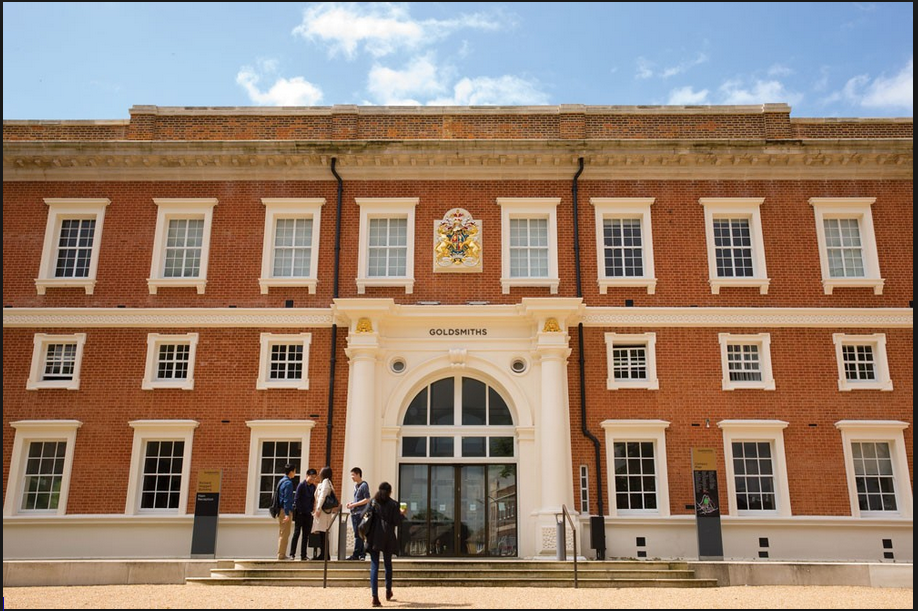 My first ever ARLIS event was held at the library of Goldsmiths, University of London. It was good to be back in New Cross, south-east London, as I lived in this area for two years…hundreds of years ago before mobiles and the World Wide Web. My hopes for the day…? I wanted an introduction to art librarianship that would give me an insight into the different areas within the profession, as well as a better idea of the work experience and skills needed to progress. As several other delegates have sent in reports of this day I will try not to be repetitive, and have selected my highlights

Our excellent introduction to the day was by Nicholas Brown, from Christie’s Education. He said that print was still on a par with electronic media, despite the digital increase. He spoke of how arts funding and libraries were under threat – especially since the 2015 election. One of the many institutes and libraries he has worked at was the Stuart Hall Library at INIVA, in Shoreditch, and he said that there was still space “to challenge neoliberal ideology”, which I found uplifting.  Brown spoke of the move away from subject specialism to functional specialism within the sector, such as the role of a copyright librarian rather than an Art specialist librarian. But he also explained how research support is growing in Arts, Humanities and Social Sciences. He emphasised how all library experience is always useful to progress but that the Library / Info Studies MA gives you an edge over the Cert. or Dip. when applying for vacancies. He encouraged us to contribute to ARLISmatters and to network within the sector. This was a great overview of the art library sector.

Antonia Lewis – Subject Librarian for Art, Design & Visual Cultures at Goldsmiths (proving that not all libraries have moved to functional specialisms) was a BA Sculpture graduate and a practising artist but a Library Assistant role at the Royal College of Art (RCA) was where her art librarian career took off. She had a good manager who allowed her to run inter-library loans and workshops and the RCA paid her fees for an MA Information Management in Cultural Organisation. In the final year of her course she applied for a job at Goldsmiths – and was shocked to get the job of Subject Librarian. In her feedback from the interview Goldsmiths were impressed by her workshops experience and her interview presentation. They wanted someone dynamic, with imagination and she had the edge on the other applicants. As well as Subject Librarian duties, Lewis also looks after English Language resources for students. Helping students use these resources creatively is a big part of her job. The Art Writing Library – about use of language in art – became a creative project in which they organised their own classification system. Lewis also does workshops with Special Collections and one-to-one tutorials. I found this a very engaging talk by someone creatively connected with her work – although sad to reflect that a once practising artist now has very little time for her own work.

Jonathan Franklin (National Gallery) – Working in a Museum or Gallery.

Jonathan Franklin is the only professional librarian at the National Gallery (NG) and shocked everyone by saying that he did not have an art history degree! Reeling from this statement (fortunately we were all seated) we listened to his career history which has culminated in his role at  NG – where he works with one non-professional assistant. He described it as a very small operation for such an internationally known gallery, due to cuts. He takes care of book selection (despite that lack of an art history degree) and cataloguing (not very well, he admitted) and I was surprised to learn that the NG catalogue is still not online, but is a long, long work in progress. Collections management and research are a big part of his job but he said public enquiries are steered towards the National Art Library at the V&A. He spoke of how cuts have affected museums to move away from a curatorial role to serving the public and reaching audiences. Libraries have shrunk and changed into a public service role: the library at the NG reports within public engagement, not curatorial engagement, as previously. Public engagement is King!

Franklin admitted that with reduced departments it’s hard to find jobs in the sector. He advised that acquiring cataloguing experience, either through a job or a cataloguing course, is important. A lot of art museum libraries still don’t have online catalogues, so a knowledge of card catalogues can be very useful. He admitted that cataloguing vacancies had gone to mature library staff rather than some CILIP-accredited applicants, as they had the experience of card systems. He recommended the book Art Museum Libraries and Librarianship, edited by Joan M. Benedetti (2007) – even though it is North American in focus. We learnt that the NG has no volunteer programme but does have internships. Franklin would love to have volunteers on board but understands all the ethical issues around this. This candid and entertaining talk was a great insight into a highly-regarded art gallery.

This was a project led by women artists, that was never intended to be an archive, but a political practice to create a slide library to raise the visibility of women artists: the collection is growing all the time. Althea Greenan did an MA in Painting at Boston, Mass. Her relationship with the collection began with writing on women artists. Initially a research resource, it became the Special Collections it is today. The “improvised” collection has grown and has become about the politics of archiving.

“The way it has developed is as important as the collection itself.” – Greenan.

She emphasised how important it is to learn from the experience of looking through the collection, the paper files of which represent about a hundred artists. Greenan set up an artist-in-residence project which explores the collection in myriad ways. I was wondering how much this collection has been shaped by Greenan in particular when she said: “The collection has shaped me more that I’ve shaped it.” (I nearly fell off my chair, and wondered if she had psychic powers). A fascinating talk, during which Greenan slowly moved around the room dropping various prints/ photos /paper archives on the large, long table we all sat around. She included her own book Human Endeavour.  https://www.gold.ac.uk/media/documents-by-section/staff-and-students/library/XMTS_HumanEndeavour_e.pdf

We also had an insight into the working life of a cataloguer and finally received CV tips and advice for the future.

Conclusions  Well worth going to – an interesting insight into art librarianship, from the issues facing the profession to the creative approaches and projects within it. All the talks were under half an hour and the coffee break was pitched at just the right time. Thank you, ARLIS