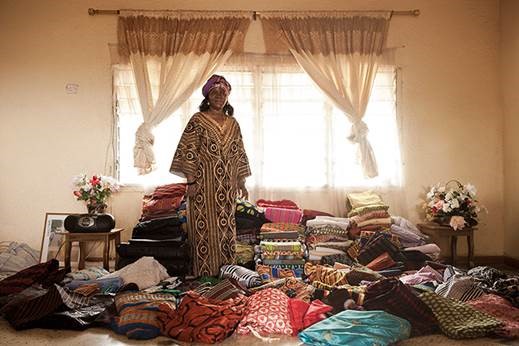 All of the talks are free to attend but booking is essential. Please see http://www.iniva.org/library for further details and booking links.

In works such as the film The Currency of Ntoma (2012) and Once Upon a Time in the West there was Lace (2008) Donkor has examined the multiple ways that fabric on the body animates both personal histories and the longer histories of the legacies of colonialism.

Alinah Azadeh’s work crosses borders of both medium and culture, embracing interdisciplinary practice and the ways it interfaces with society. Works such as Burning the Books, a touring public performance and participation project which shines a light on the foggy and often fearful concept of debt on the individual and society. Her work using the ritual of wrapping in the current exhibition at Swiss Cottage Library actively references her Iranian heritage and in particular the loss of her mother in the Asian Tsunami in 2004, directly following the birth of Alinah’s first child.

Against the conceptual backdrop of Lewis Hyde’s linking of creativity to ‘gift’, and questioning the place of creativity in contemporary culture and today’s economic market, Christine and Susan will explore the materiality and haptic quality present in Susan’s use of every-day ‘stuff’; cloth, banknotes, coffee, maps, to create work. Operating within the ‘in-between space’ at the border of craft and visual art, Susan elegantly challenges us to face the lingering aftermath of colonization, global consumption and waste, the inequalities and injustices founded on negative readings of difference and our collective consciousness, or indeed, lack of consciousness.

Dr Christine Shaw-Checinska is a designer, writer and curator. Christine’s work is situated at the meeting point between material culture and contemporary art. She writes about the relationship between cloth, culture and race. The cultural exchanges that occur as a result of movement and migration, creating creolised cultural forms, are her recurring themes. The correlation between personal history and received history is an ongoing interest. She is currently an Associate Researcher at the Visual Identities in Art and Design Research Centre, University of Johannesburg, and an Associate Lecturer in fashion at Goldsmiths, London. As a creative designer, Christine has created womenswear collections for a number of iconic British brands including Margaret Howell. She is currently Head of Design at Navabi. Her natural design flair and creative energy has seen her anticipating new trends, styling press launches, fashion shows and shoots, alongside mentoring emerging fashion practitioners.

Godfried Donkor is an internationally renowned artist who has exhibited at the Venice Biennale, The Institute of Contemporary Art, London, the National Museum in Ghana, Tate Modern and at the Dakar Biennale in Senegal where he won the ‘Prix de la Revelation’. He was born in 1964 in Kumasi Ghana, the son of a dressmaker and moved to the UK as a child. His studies have included an MA in African Art History at the School of Oriental and African Studies and a BA in Fine Art Practice at Central Saint Martins, as well as post-graduate studies at Escolla Massana in Barcelona.

Alinah Azadeh is an interdisciplinary artist, working predominantly in the public realm. Since her MA in Art and Media Practice at the University of Westminster in 2001 she has produced installation works, encompassing sculpture, textile and written language, which act as a container for narrative exchanges in response to the central themes of human experience. Her initial concepts lead to processes involving live interaction with audiences, rooted in communal ritual and processes of gift and exchange. Alongside her public work, she creates smaller works such as fabric sculptures, which are a combination of found objects, cloth bindings and texts.

Susan Stockwell has a highly regarded reputation for making innovative art works. Her practice is concerned with ecology, politics, mapping, trade and global commerce. She uses materials from the everyday and the domestic, from manufacturing and industry, from toilet tissue on an industrial scale (Paper Installation, Bernard Jacobson Gallery, London, 1994) to recycled computer components (Flood, York, 2010) and paper currency from a variety of countries with exacting methodologies that include a high level of precision and detail. Susan is also interested in participatory art practice and has worked with a range of groups including inmates from Wandsworth Prison (Fine Cell Works). In 2013 she made Sail Away, an interactive installation in the Turbine Hall of Tate Modern for the Hyperlink Festival curated by Tate Collective. In 2015 she was Artist in Residence at the Royal Shakespeare Company in Stratford-upon-Avon where she developed new work for exhibition in the RSC’s public and gallery spaces (April-September 2015). The work was made in response to the plays, Othello and The Merchant of Venice and to the carefully choreographed range of hidden activity, which occurs backstage and behind the live performance, from costume making to rigging to rehearsal.