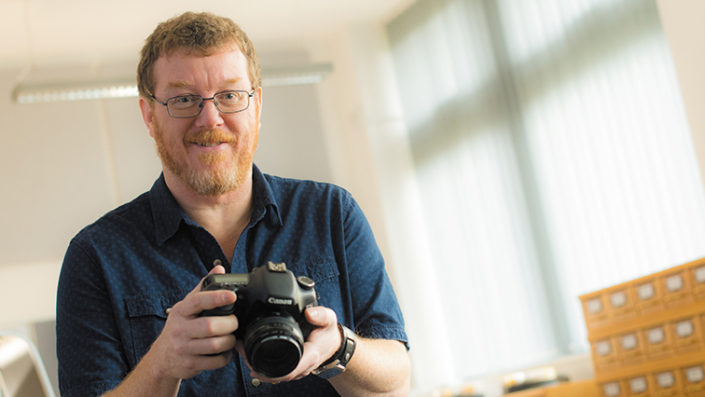 In this October feature we cautiously depart from librarianship and traverse the digital realm with our guide, Matt Davies; Manager of the Digital Humanities Centre at the University of Nottingham (UoN). A self-confessed ‘non-librarian’, Matt talks ‘de-pinking’, wrestling with 12-ft kayaks and, of course, virtual reality.

How did you come to digital humanities?

I’m not sure if the phrase organic serendipity exists but if not I’m claiming it here to describe the path by which the Digital Humanities Centre (DHC) and I got to where we are today..

Following an MA in Art History here at UoN, financially supported by working in the university’s Djanogly Art Gallery, the Art History department took me on as Slide Librarian and also to develop a digital image service for teaching staff. They also wanted me to look at the feasibility of digitising the slide collection to build a searchable digital image database.

The department was generous and forward thinking in helping me to develop digital skills by sending me on a number of JISC (then TASI) courses, including digital photography, metadata, scanning with CLA License and copyright. The latter, copyright, was the breaking point for all slide librarians looking to provide a digital alternative as we know! It’s also how I became involved with ARLIS, despite (ssssh) not being a librarian. My involvement in ACADI’s ultimately doomed campaign for a license to produce digital images for teaching, which would have helped saved many slide collections and librarians, drew the attention of ARLIS’s Visual Resource Committee (and ACADI) chair Vicky Brown who offered me a place on the committee.[1]

UoN’s Art History Slide Library became the Visual Resource Centre (VRC) as it broadened its remit to include digital resources and things began to move very quickly, in tandem with the ‘digital revolution’ perhaps.  In 2008 I was part of a small arts team, which made a successful bid for capital investment funding to boost the faculty’s digital profile. This included the purchase of digitisation equipment, including scanners of all shapes and sizes, DSLR cameras, graphics software and, most exciting of all, a 3D scanner.

At that stage, UoN’s digital humanities folk and their equipment were scattered across the university’s campus and, here comes the serendipity, in 2011 the university decided that all the humanities departments should be housed in one building.  A space within the new Humanities Building was created for the Slide Library and all of the new (and old) digital equipment and so the DHC was born. My role remained as Centre Manager, now responsible to all seven departments in the School of Humanities.

Talk us through a typical day for you at work:

There doesn’t seem to be any such thing! It is somewhat seasonal for a start, so whilst the summer months can be spent catching up on admin, once the academic year begins I spend a great deal of my time each day managing the DHC’s student volunteers. There are approximately 20-30 volunteers each year who are organised across three teams; Digital Marketing, Collections, and Digital Photography, Video & Audio.  After some basic training they sign up to a weekly two hour shift at the DHC gaining digital and transferable skills as well as invaluable work experience.

They also work on digital themed projects which vary each year and managing those takes up a lot of my time. This year for instance, we are starting two new digitisation projects; one to digitise the university’s Djanogly Art Gallery’s archive which dates back to the 1950s, another an archive of 1960s Cuban newspapers from the university’s Hennessy Collection.

We are also going to be working with the Djanogly Gallery to produce digital content that will link with an exhibition due to begin in June 2018 called Scaling the Sublime. We are hoping to digitally link the exhibits to the content using an app called Artcodes which allows the user to build URL codes into patterns, designs or artwork which can be (unlike URL codes) aesthetically pleasing. The Artcodes app was developed by a UoN Research Institute Horizon Digital Economy.

Marketing and promotion take up a fair bit of my time too; it’s essential to ensure that current staff and students, as well as prospective students, are aware of what DHC offers. The start of term is incredibly busy with me dropping into welcome meetings armed with my PowerPoint presentation. The DHC’s student volunteer marketing team are of course massively helpful on this front and we run Facebook, Twitter, Instagram pages and a blog, the latter reporting on many of the projects discussed. We can also often be found supporting events and running activities at university and community open days.

I also spend time most days dealing with enquiries from staff and students visiting the DHC. These could be equipment loans or simple digitisation queries; how to digitally capture texts, images and transparencies (copyright being observed at all times of course!). Sometimes it can be more complicated; examples over recent years have included large maps, WWI medals, cap badges (and fidget spinners when I ran a digitisation workshop for a class of 11 year olds last year!), very old bibles, archaeological finds, oil paintings, 19th-century hand drawn lace patterns (this is Nottingham after all!) an art student/model from Essex, and a 12-ft kayak…

…I may come back to a few of those.

Is there space for the analogue in your digital domain?

The analogue still has a place in the DHC; besides the slide collection we have a collection of books and DVDs that we look after for a Classics module called the Independent Second Year Project (ISYP), and an ancient coin collection.  All of these collections have been invaluable in teaching the students about the handling, classification and value of physical collections but, most importantly for us, how they can be captured and presented in digital format.

The slide collection has proved a valuable resource for volunteers learning about digitisation and Photoshop skills, they do enjoy de-pinking those old slides! But they have also learnt some (rather eccentric) classification systems whilst sampling the joys of re-filing and weeding the collection. In fact the 2016-17 volunteer slide librarians took this fascination with the collection to a whole new level (and me to a whole new stress level!) when they decided that the DHC should mount an exhibition.  We decided that in keeping with the DHC ethos we should project 35mm slides alongside digital images to juxtapose old and new technologies, teaching methods and indeed images. The exhibition was called Then and Now and was a great success for the DHC and a fantastic experience for the students, although a far more time consuming and stressful undertaking than any of us had imagined.

Well we have had some funny requests, as mentioned above; 3D scanning the 12-ft kayak with a team of engineering students must be up there as one of the weirdest, but we did it and indeed you can watch a time lapse video of the process here.

Another unusual one that I am very proud to have been involved in, albeit as host, enabler and general help, was the 3D scanning of a live model in the DHC by artist James E. Smith. He filmed the process and printed out the 3D model producing an astonishing dual installation that was exhibited and eventually bought by The Collection in Lincoln.  It has recently been on display again as part of Nottingham’s Castle Museum and Art Gallery’s Reportrait exhibition.  James was Leonardo Fellow in the DHC from 2014-16 and besides producing Model he lent us his expertise in making the best use of the DHC’s cameras and leading a team of the volunteers on a project to film an art symposium at the university. I enjoyed working with James and despite the fact that he now resides in New Zealand we stay in touch and use Facebook messenger to continue our discussions on art, tech and black metal music!

One great tip for people starting out in digital humanities?

Be adaptable. The digital landscape changes constantly and it really is a challenge to keep up with ongoing innovations and the way in which they are applied to research and teaching in the arts. For instance this year the DHC will be moving into the virtual world! We have just invested in an Oculus Rift (virtual reality headset) and one of the new volunteer projects for 2017-18 is to create a virtual DHC. We’ll be doing this from scratch by self-teaching, but we hope to be curating our own virtual gallery space by the end of the year, possibly with work digitised from other projects. Watch this (virtual) space!

The best benefit about ARLIS/UK & Ireland?

This is probably going to sound a little obvious but I think the greatest benefit to being a member of ARLIS is the opportunity it presents to (buzzword alert) ‘network’ with like-minded people.  I found this to be the case particularly as my role has never been part of the Information/ Library Services at UoN so I have always been pretty much on my own.  Joining ARLIS (and ACADI) introduced me to other people working in the same area with whom I can chat and exchange ideas.  I think it is vital that ARLIS retains and builds upon this aspect of what it does as it goes through the current changes.  It is great to see ARLIS embracing social networking – Facebook, Twitter, Instagram – we really need to attract the younger generation of arts information specialists if we are to remain relevant in the constantly changing world of arts librarianship.

[1] I later wrote about the campaign for a digitisation license for the Arts Libraries Journal (see ALJ vol.37, no.2), Jenny Godfrey (also an ex-ACADI/VRC member) has also written passionately about the plight of slide collections (see ALJ vol.39, nos.4 & 5).

One thought on “In conversation with…”